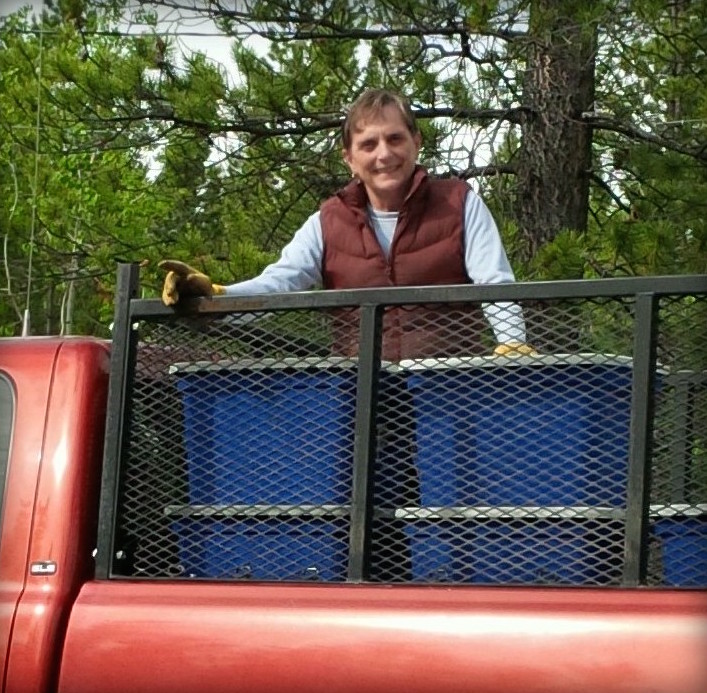 Kathy Spalding is a veteran expeditor of more than 30 years. She started her career in Watson Lake and made the move to Whitehorse in 1988.

Owner of Over the Top Adventures, Kathy has supplied expediting, logistics and transport services for the Casino camp since 2008. Using locally based providers including Independent Grocers (formerly Extra Foods), Ajax Steel and Alkan Air, Kathy fills grocery orders and sends parts and supplies of every kind on inbound flights, and on the return, offers shipping and deliveries such as water and rock samples to labs, as well as compost and recycling services.

“We produce minimal waste,” says Kathy, who delivers surplus groceries to the Mary House, a local charity in Whitehorse.

“They bend over backwards to accommodate our needs,” Kathy says about her rewarding relationship with suppliers.

“They take good care of us because they understand the short season demands of the industry and the importance of quick responses.”

Expediting is an exciting and rewarding job. “Everyone at Casino is so dedicated and my work experience offers something different every day,” says Kathy.

During the o-season, Kathy focuses her attention to her other passion, which is creating delicious dessert toppings in her commercial kitchen using old family recipes. “We all need to be versatile and creative because of the seasonal and cyclical nature of this business.”

Kelsey (centre) with Calef and Murphy at a favourite fishing hole.

Moving Forward With Fire… and Caribou!

A born and raised Yukoner and a graduate of UBC’s Natural Resource Conservation Program, Kelsey’s primary role for Casino was analyzing survey data and in combination with existing literature, writing a wildlife baseline report to document an inventory of existing wildlife and key indicator species in the project area including moose, caribou and grizzly bear.

Kelsey cannot recall a time that she was not interested in biology and her natural surroundings.

“I grew up here learning about wildlife and appreciating the outdoors. Anyone can learn the practical skills of being a biologist,” advises Kelsey. “The key is being able to focus on the big picture as opposed to smaller details.”

Entering a new phase of her career, Kelsey has headed to the University of Northern British Columbia in Prince George to pursue a Master’s of Science in Biology with the support of Casino Mining Corp. ‘This great opportunity has come up where I can study something which I am genuinely interested in, and that is human disturbance effects on wildlife.’

Her research goal is to better quantify cumulative effects to late-winter habitat of Klaza caribou, including the effects of forest fires. In collaboration with Environment Yukon, Kelsey will have access to caribou collar data and other information to help with her research. Environment Yukon will also offer logistical support throughout her field studies this summer.

Kelsey has created a strong support network for her studies. ‘EDI has been very encouraging, allowing me the time off for my studies and to gain new skills and knowledge which I hope to bring back with me in a couple of years.’

Casino is also supporting Kelsey in her fieldwork this summer, with generous helicopter time and accommodations at the Casino camp. ‘It was a natural fit for Casino to support Kelsey’s studies,’ says Casino President Paul West-Sells. ‘We are helping build local capacity and in turn Casino will gain new methods of effects assessment prediction in the Casino Project area.’

Kelsey moved to Prince George in the fall of 2014 with her partner, Calef and their goldendoodle, Murphy. ‘I am really looking forward to this new challenge and am excited to start working towards a goal that is very important to me’ beams Kelsey. 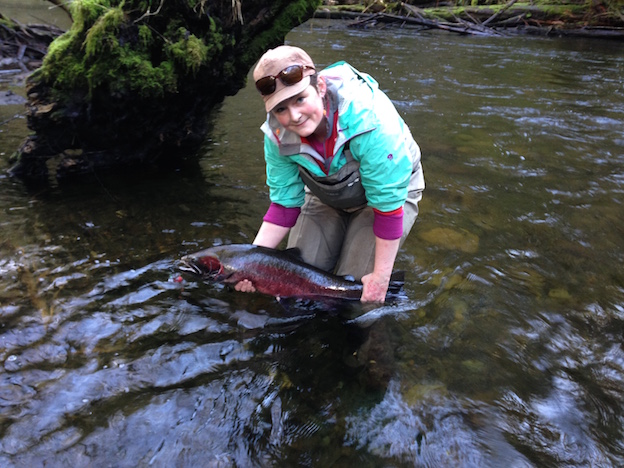 “It’s been a very busy semester with coursework, data analysis and proposal writing and I hope to have some preliminary research results by the end of the summer (re: caribou behaviour in burns based on movement patterns).

Based on some preliminary analyses, it seems that approximately 20 per cent of the Klaza caribou herd’s annual range (one of two caribou herds in the Casino property region) has burned in the last 50 years and, although I’m still waiting on the final year of late-winter collar data, it looks like about 8 per cent of collar locations in late-winter are located in burns, and ~72 per cent of collared individuals do move through burns during late-winter.

In the coming months I will be focusing on these locations in burns and conducting further research to see what kind of habitat and/or terrain attributes Klaza caribou are selecting for or avoiding in burns.” 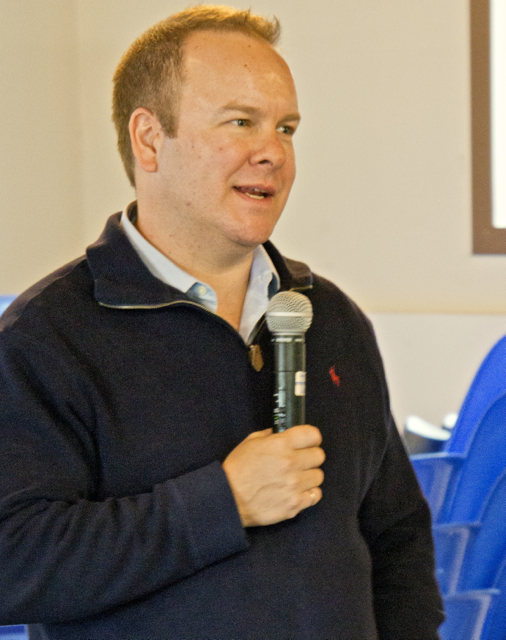 Paul West-Sells makes a community presentation on the Casino project.

Company President Dr. Paul West-Sells, by his own admission, may have taken something of a risk in leaving a senior mining company to take up the reins at a junior operation, but one of his main motivations was the opportunity to “get to wear a number of hats.” His oldest hats marked ‘metallurgist’ and ‘engineer’ are permanent fixtures in his current role, but the door to a much fuller wardrobe of headwear is always open.

The son of a civil engineer, Paul admits that “chemistry was my early passion” and that “I was the kid who nearly burnt his fingers off undertaking laboratory experiments.” In an earlier era he would have been labeled an alchemist but his science project work led him into metallurgy, formalized through undergraduate and postgraduate degrees at the University of British Columbia. His doctoral thesis, sponsored by Teck Cominco in Trail BC, kept him close to his hometown of Kimberley in the Kootenays. His early specializations were in hydrometallurgy and the aqueous processing of zinc.

The Research and Development Centre owned by BHP in Reno, Nevada drew Paul after graduation in 1996 where he worked on projects focusing upon the upgrading of ilmenite (an iron- titanium ore) specifically in the production of paint pigments, and also in water purification where it serves as a catalyst to oxidize biological and viral contaminants. It also provided Paul with his introduction to the world of copper through bioleaching project work.

Whilst still an employee of BHP, he moved back to Vancouver in 2000 to continue his research and development career with Placer Dome. Transitioning to Barrick Gold in 2006 he was provided the opportunity to work on cyanide alternatives in gold processing and at Barrick’s Zaldivar property in Northern Chile where his expertise in copper production was enhanced. Experience in cost-recovery economics in mining was strengthened through his eight-month tenure with Barrick.

Western Copper and Gold approached Paul in 2006 when he accepted the role of Senior Metallurgist before promotion to the role of Executive Vice President of Corporate Development in 2008. His early responsibilities entailed managing pre-feasibility assessments on the Casino project in the Yukon. Marketing and investor- relationship responsibilities were precursors to his current position as President in 2010. His is the responsibility for day- to-day operations being completed to schedule.

Paul gives the Casino project his full focus and openly admits that “it is all I am working on right now.” For him it is “a very important project that brings me to the Yukon every month now, more frequently during the busy summer months.” He acknowledges the importance of “spending time in the communities and developing relationships over the years, and I am glad that we did so before going to YESAB.”

Knowing the potential challenges of obtaining full approval, Paul admits that he is “looking forward to the process of responding to the project assessors” and feels “very confident that we will get the project permitted and that Casino will serve as a long-lasting asset in the Yukon.” Casino Mining Corporation is the wholly owned subsidiary of Western Copper and Gold Corporation based in Vancouver. Asked to characterize the Casino project he describes it as “conventional technology done right.”When asked further if he saw Casino as his legacy project, he said “that would be a little presumptive, as there are far too many other people involved to warrant that description for me.”

Paul lives in Vancouver with his family including a five-year-old son and three- year-old daughter and their Bernese- Retriever crossbreed, all of whom were “likely still on a sugar high from the previous night’s Halloween festivities.” He still finds time for the important things in life at home before departing to a precious metals conference in Zurich. On his return he will be representing Casino Mining Corporation at the Yukon Geoscience Forum this month.