Minted between 1667 and 1671 during China’s Qing Dynasty, the coin was found in the Yukon, along the historic Dyea to Fort Selkirk trade route (Photo: Ecofor Consulting Ltd).

In June 2011, James Mooney, a cultural resource specialist with Ecofor Consulting Limited, made an exciting discovery while leading a team doing heritage impact assessment work for Western Copper and Gold Corporation (“Western Copper and Gold”) (TSX:WRN, NYSE Amex:WRN). On the proposed Freegold Road Extension to the Casino copper-gold-molybdenum deposit, one of his team members unearthed a Chinese coin minted between 1667 and 1671. The coin adds to the body of evidence that the Chinese market connected with Yukon First Nations through Russian and coastal Tlingit trade intermediaries during the late 17th and 18th centuries and perhaps as early as the 15th century.

The Chinese coin was found within the Selkirk First Nation traditional territory on thehistoric Dyea to Fort Selkirk trade route. Mooney says, “I was less than a metre from our archaeologist Kirby Booker when she turned over the first shovel of topsoil and I caught sight of something dangling from the turf. It was the coin – the neatest discovery I’ve ever been part of.”

Research shows that Chinese coins were common along the Northwest Coast of present-day North America, brought back by Russians when they traded furs to the Chinese in exchange for their goods. The Russians traded goods such as tobacco, tea, beads, firearms, iron implements, kettles, needles, clothing and flour directly with the Tlingit in exchange for furs: sea otter, fur seal, fox, beaver, lynx and marten.The Tlingit tightly controlled direct trade with the interior First Nations by controlling access to the Chilkoot Pass, one of the few entry points through the coastal mountains to the interior. Mooney says that the location of the find, on a promontory overlooking a river and creek tributary, is a likely place for a traveler to have rested or camped between Dyea and Fort Selkirk.

Although common on the coast, only three Chinese coins have been found in Yukon to date. The coins are round with a square hole in the centre but the one found by Ecofor stands apart because it has four additional small holes above each corner of the central square. Mooney says, “The extra holes could have been made in China – coins were sometimes nailed to a gate, door or ridgepole for good luck. Alternatively, First Nations might have made the extra holes to attach them to clothing. They used the coins as decoration or sewed them in layers like roofing shingles onto hide shirts to protect warriors from arrow impacts.”

Paul West-Sells, President & Chief Operating Officer of Western Copper and Gold says, “Heritage resource assessments are an important part of the environment and socio-economic baseline work of any project, and Casino is no exception. It’s satisfying that the work we’re doing to support development of the Casino project is also contributing to the understanding of Yukon’s heritage.” 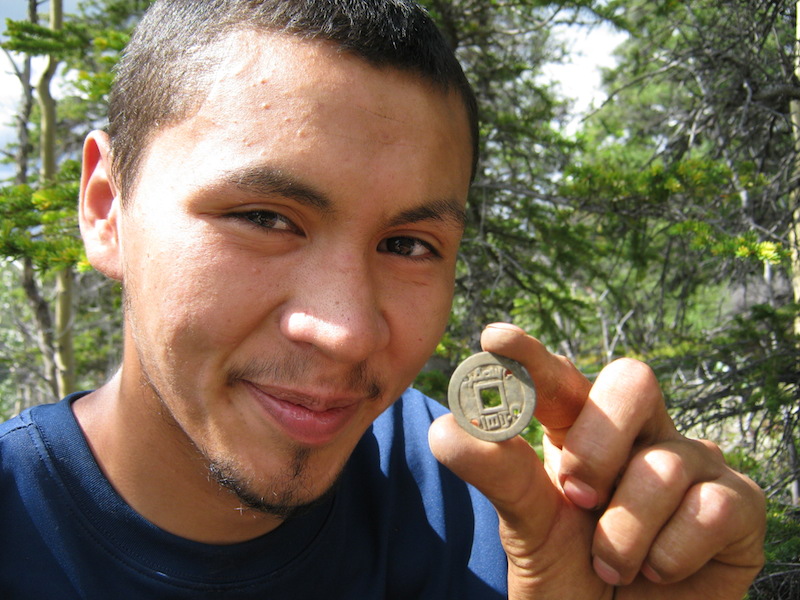 Mario Skookum from the Little Salmon/Carmacks First Nation was among those who discovered the coin (Photo: Ecofor Consulting Ltd.).

Three Chinese coins have been found in Yukon to date. All three coins are of traditional Chinese design – round with a square hole in the centre.